DJSI: Five German companies among the European leaders in sustainability 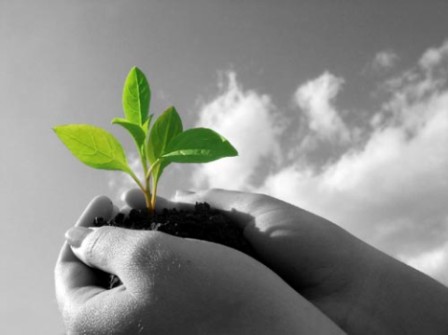 What’s notable is that 14 sustainability industry group leaders are from Europe, one up from last year. Of those 14, five of these industry group leaders are German, more than double the two named in 2012. These are: Volkswagen in the “Automobiles & Components,” Siemens in “Capital Goods,” Henkel in “Household & Personal Products,” Allianz in “Insurance,” and SAP in Software & Services.” 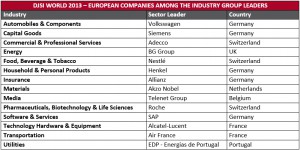 The five European companies that dropped out of the index were among the largest 10 deletions in DJSI World. Four belong to the U.K., one to Germany. Listed in descending order of float-adjusted market capital, they are: HSBC, Vodafone, Glencore Xstrata, Lloyds, and Deutsche Telekom.

As for the largest deletions in DJSI Europe, two German firms were dropped – Bayer and Deutsche Telekom – as well as three companies from the “Capital Goods” industry group – EADS of France, Philips of the Netherlands, and IMI of the U.K.

Among the lowest scores in DJSI Worldwide, there was a general increase in values from 2012. The Economic Dimension increased 14 points to 83, the Environmental Dimension rose 4 to 76, and the Social Dimension jumped 8 to 79. While last year showed a bigger gap in the index between Europe and the world (79 to 71), this year, it narrowed from 83 to 82.

In the European index, there was a loss of value in the Environmental Dimension (-8), which can be explained by the drop in the values of Climate Strategy (-31), Environmental Policy/Management Systems (-10), and Operation Eco-Efficiency (-8). However, there was an increase in the Economic and Social Dimensions (+11 and +1, respectively). 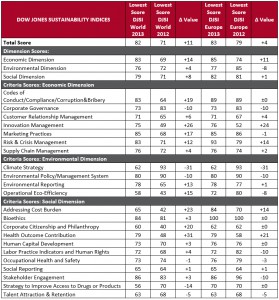