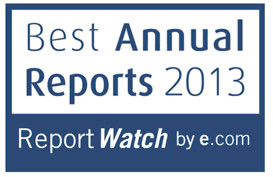 Annual reports don’t exist just to meet laws and regulations – good reporting goes beyond compliance. So says ReportWatch’s co-founder and editor Mike Guillaume. The annual report is a crucial platform for setting out corporate strategy and charting its execution.
European companies yet again dominate e.com’s ranking of the world’s best annual reports. Of the 400 global companies on the list (an increase from last year’s 300), 268 are European, 74 are Asian, 49 are North American, and 4 are African. Once more, there are no South American companies among the 400. Grades range from A+ (“first-rate”) to D (“uncompetitve”) and are based on 25 criteria. 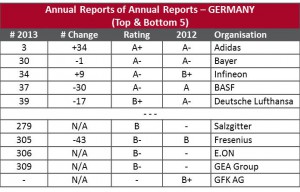 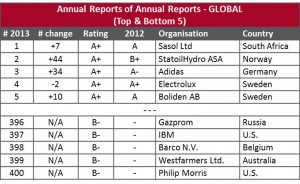 What’s notable is the dominance of annual reports from the oil industry – South Africa’s Sasol is #1, followed by Norway’s Statoil at #2.

European corporations are predominant in ReportWatch’s Best Annual Reports 2013 and they also occupy the leading positions.

Swedish firms took top honours again while the Nordic region as a whole (Finland, Norway, Sweden) put in a strong showing. Sweden leads with the most high-ranking reports (those rated A- or better) with 13 in 2013 and 17 in 2012. In total, there are 18 Nordic outfits in the top performers.

Four German companies are among the top-rated annual reports (one less than last year) – Adidas at #3 with A+, Bayer at #30 with A-, Infineon at #34 with A-, and BASF at #37 with A-. The German top five – Adidas, Bayer, Infineon, BASF, and Lufthansa – changed little, the only difference this year being Adidas coming ahead of Bayer. With the exception of one familiar name, E.On, the German bottom five is filled with newcomers. This is likely due to the expansion of the list from last year’s 300 names to this year’s 400. Overall, 40 German firms made it into the ranking, nine more than 2012, which, again, is probably attributable to the growth of the list.

Surprisingly, IBM, which according to ReportWatch, “probably pioneered” the annual report, performed poorly. It stands at #397 on the list with a B-. In fact, 200 other reports were evaluated by ReportWatch but excluded from the list because their results were too poor, and of those, 85 are well-known American companies – Google with a mark of D, Kraft Foods with C-, and Microsoft with C-. Another of a big-name fail is Johnson & Johnson. Ranked #266 in 2012, it dropped off the list entirely this year with a grade of C, with ReportWatch lamenting that reading its annual report “produces the same effect as a sleeping pill.”